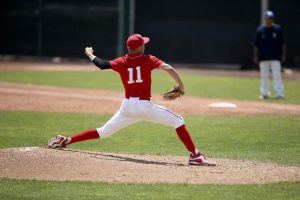 This Region 10 baseball race is getting really interesting.

Three teams are jockeying for position at the top and Spanish Fork took a big step on Thursday, jumping out early on Lehi and holding on for a 5-2 win.

The Dons are 9-1 in league play with two games remaining next week against Salem Hills, which is 8-2. Lehi finished the region schedule with a 9-3 mark.

On Wednesday, Lehi handed Spanish Fork its first region loss in a 3-2 extra inning win, but the Dons responded with a big game from senior Cy Nielson. The BYU commit scattered six hits and didn’t allow an earned run in six innings while going 3 for 3 at the plate with a double and a triple while driving in two runs.

“I think this win was huge,” Nielson said. “We really came together as a team. Losing yesterday set us a new tone that we needed to get after it. Losing that game took us off guard but now we’re on a roll. We’re snowballing in a good direction, I guess you could say.”

The Dons were patient in the first inning and drew three walks off of Lehi starter Hayden Jacobson. Nielson’s blast to left-center resulted in a triple and brought in two runs. Later, Dawson Lee came in on a Lehi throwing error for a 3-0 advantage after one.

“It (a 3-0 lead) is the best, I love it,” Nielson said. “I already have a lot of confidence in my teammates and it makes it even better when we go out with a 3-0 lead. I can just go out there, throw with my full confidence and everyone else can make plays.”

Lehi took advantage of three Spanish Fork errors to score single runs in the second and third innings and closed to 4-2. Jacobson settled down and allowed just one more run, an RBI single by pinch hitter Blair Neilson in the fifth.

Cy Nielson struck out seven and was the beneficiary of a nifty double play by shortstop Andrew Pintar in the sixth after the first two Lehi batters reached base. Neilson gave way to a reliever in the seventh and Taye Newman set down the Pioneers in order to finish the game.

“This win was freaking huge,” Nelson said. “We didn’t get some bounces yesterday and didn’t catch a couple of breaks, but they (Lehi) created their own breaks. They are a good team. Our challenge the rest of the week after we lost yesterday was to go 1-0. The guys did a great job responding. This gives us a chance to sit in the driver’s seat, be region champs and get the No. 1 seed.”

No Events This Week

Events are added by athletic staff.
View All Events